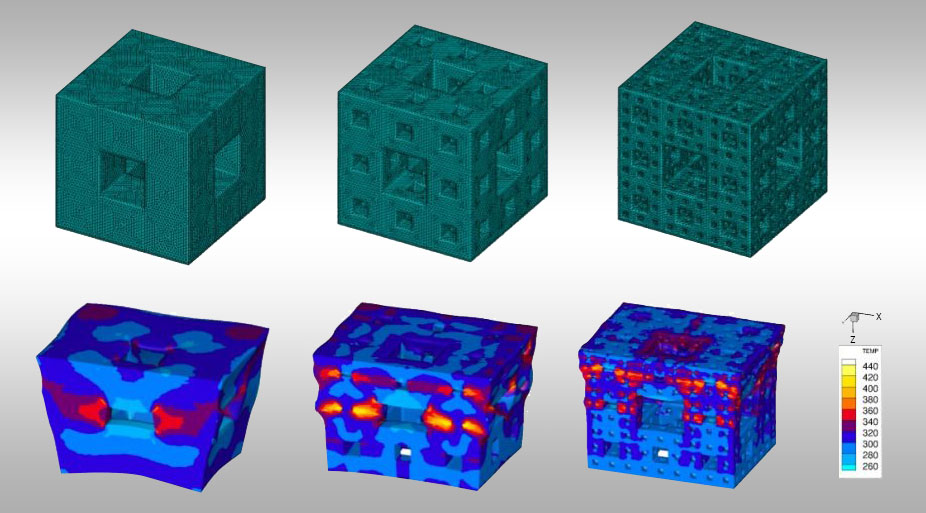 The Los Alamos National Laboratory’s researchers have made their mark in the area of material science. They have come up with the discovery of fractal structures with closely spaced voids dissipate shockwaves five times more than solid cubes. “The purpose of the research is to control the interactions between waves resulting from a shock wave” said Dana Dattelbaum, a Los Alamos National Laboratory Scientist.

Tiny, 3D printed plastic cubes, with complex fractal voids built into them, have proven effective at dissipating shock waves, potentially leading to new forms of lightweight armor and structural materials that are effective against explosions and their impacts. Shockwave dispersing materials have been produced in the past that take advantage of voids, but usually require random distributions discovered through trial and error.

The researchers tested their fractal structures by shooting an impactor roughly 670 miles/hour into the structure. The designed cubes had five times better dissipated the shocks than solid cubes of the same size.

Advances in tactical strategies and increased cost-consciousness in the defense sector have prompted various countries to reorganize their armed forces and to develop flexible, deployable and strong military force. Recent developments in armor materials have boosted investment in sophisticated defense equipment offering improved efficiency and service and incuring low maintenance costs. These specifications have spurred the production of programs for military modernization that culminated in the upgrading of armors.

The production of advanced armor materials will be the key factors in driving the demand for armor materials. Metals such as high density steel , aluminium and titanium, along with their alloys, are utilised as armor materials for aircraft, aerospace and marine armor systems. Body armor material market is expected to grow in terms of value and volume. The increase of international terrorism, insurgency, and militant groups’ use of high-tech weapons has sparked the need for better systems of armour. This is aggravating security concerns in developing markets, so such armor material will provide support to law enforcement and military personnel.

This research would be a milestone in providing lightweight armor and structural materials that are effective against explosions and their impacts.