3-[2-[4-[3-(trifluoromethyl)phenyl]piperazin-1-yl]ethyl]-1H-benzimidazol-2-one, better known as Flibanserin, was initially studied as an antidepressant drug[1]. It was later repurposed for the treatment of libido for women i.e. hypoactive sexual desire disorder (HSDD). It was first investigated for HSDD, by Boehringer Ingelheim but was rejected by the US FDA in 2010 due to statistically insufficient data to favor the effect on enhancing sexual desire[2]. Later in 2012, Sprout Pharmaceuticals bought Flibanserin from Boehringer Ingelheim[3].

After another FDA rejection, Flibanserin was finally approved by the FDA in August 2015 for the treatment of hypoactive sexual desire disorder (HSDD) in premenopausal women[4]. Soon after receiving the approval, Sprout Pharmaceuticals was acquired by Valeant Pharmaceuticals for USD 1 Billion, which then started marketing Flibanserin under the trade name Addyi™ (100mg oral tablet)[5]. 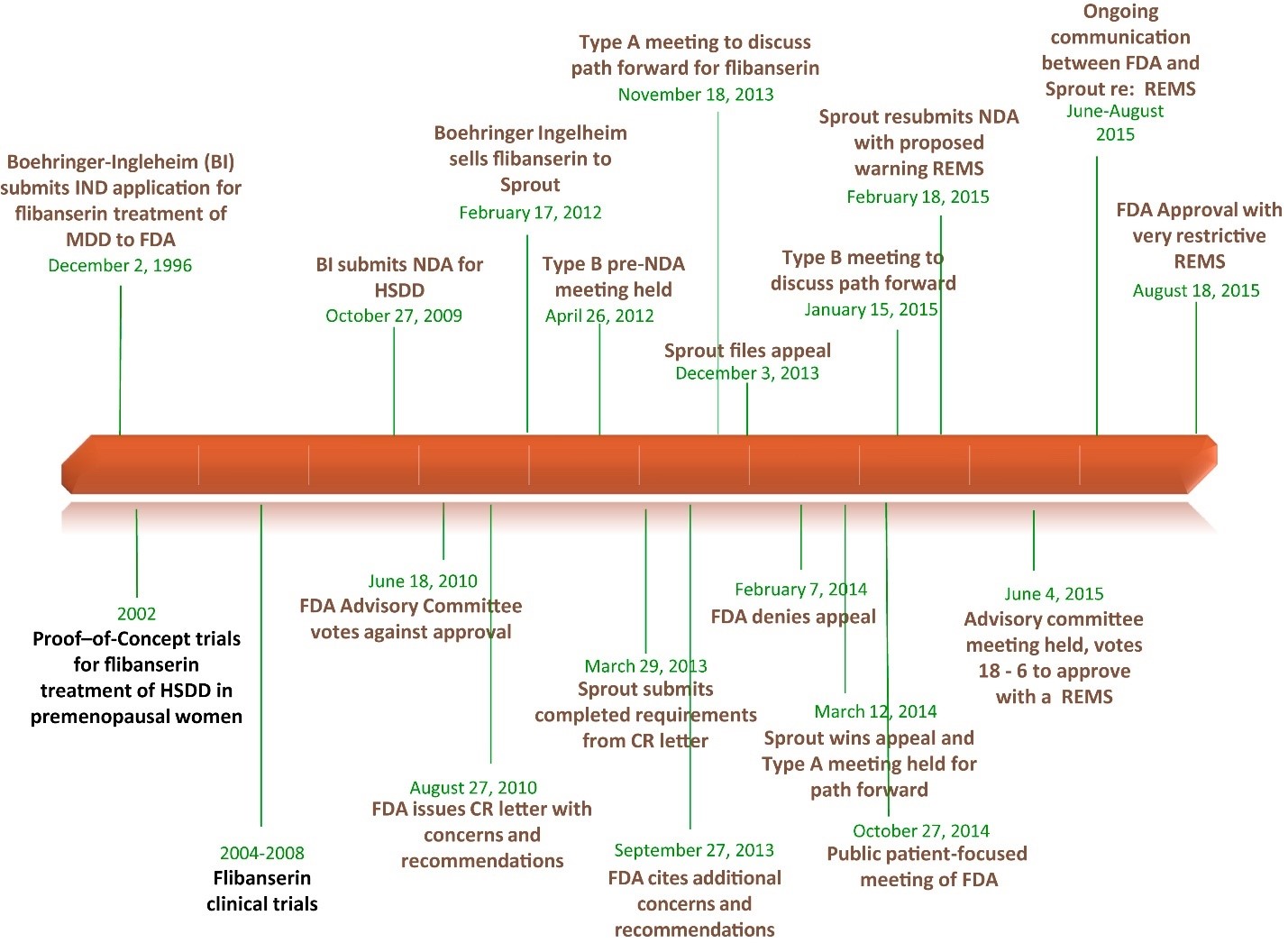 Drug Mechanism: Flibanserin works in association with serotonin receptors (5-HT1A and 5-HT2A). Both 5-HT1A and 5-HT2A receptors affect anxiety, blood pressure regulation and sexual desire. Sexual desire is mediated by brain circuits that connect prefrontal cortex (PFC) with limbic and cortical areas. Neurotransmitters such as dopamine and norepinephrine and hormones like testosterone and estrogen are major up-regulators for this process. Hypoactive sexual desire disorder is believed to be the result of inhibition of these neurotransmitters. Addyi™ modulates serotonin receptors which cause an increase in the release of these neurotransmitters subsequently enhancing sexual desire[6].

Most common side effects of Flibanserin include dizziness, nausea, and tiredness. The intake of the drug should be avoided by women who have hepatic impairment or women who are on moderate or strong cytochrome P4503A4 inhibitors such as azole antifungals or protease inhibitors.

Flibanserin is contraindicated in patients with hepatic impairment as there are main risks of hypotension and syncope.

It is advised to take flibanserin at night to avoid possible adverse effects, which are more prominent when it is taken in the morning. Pregnancy and breastfeeding should be avoided while taking Flibanserin.

Treatment should be discontinued after eight weeks if no improvement in sexual desire and associated distress is observed. Flibanserin is approved with a risk evaluation and mitigation strategy (REMS), which includes elements to assure safe use (ETASU).

The University of Chicago and the San Diego Sexual Medicine are currently recruiting participants for their clinical trials of flibanserin for hypoactive sexual desire disorder.

Study Purpose: To determine whether efficacy of Flibanserin as determined by changes in the desire domain of the Female Sexual Function Index (FSFI) in women who respond to the study medication is greater when sex therapy is performed concomitant with the use of the medication.

Despite revamping the marketing strategy for Addyi™, drug sales are low. Two possible reasons are:

Other factors that may have contributed to the diminished sales of Addyi™ are:

So far, Addyi™ has been unable to establish itself in the market. This could be the reason why Valeant Pharmaceuticals decided to divest Sprout Pharmaceuticals. However, it may not be the end of the road for Flibanserin or future drugs for treatment of HSDD. Flibanserin is the first drug of its class and has in fact acted like a gateway to research in this field.