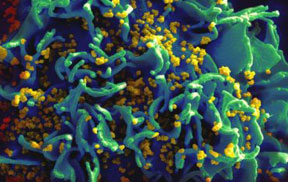 The key impediment to a cure for human immunodeficiency virus (HIV) infection is the presence of latent, HIV-infected cells, which can come back and produce new viruses when antiretroviral drug therapy is stopped. These latent, HIV-infected cells remain untouched by antiretroviral therapy and are not recognized by our immune system.
Recently, researchers at Blood Systems Research Institute (BSRI), the University of California at San Francisco (UCSF), and the University of Hawaii have reported that how a specific sugar coating on the surface of human cells affect the fate of the HIV that lies inside and might be helpful to eradicate the biggest fear of mankind.

The path of finding the cure for human immunodeficiency virus (HIV) infection has always been hindered by a property of viral cells that allows it to quickly adapt to the host environment. This was due to the presence of latent viral cells which can come back and produce new virus when antiretroviral drug therapy is stopped. These cells are usually not recognized by our immune system.

For last two decades, antiretroviral drugs have been shown to morbidity and mortality associated with HIV infection, but a cure is not established as these drugs could not completely clear viral infection. These cells are hidden and are activated after the anti-viral therapy, due to which infection persists.

Scientists at Blood Systems Research Institute (BSRI), the University of California at San Francisco (UCSF), and the University of Hawaii have discovered that the human sugar-binding immunomodulatory protein — galectin-9 — is capable of forcing the latent cells out of hiding and make infected cells visible to the immune system (Mohamed Abdel-Mohsen et al PLOS Pathogens, 2016; 12 (6)).

It had been previously discovered that there were human genes that helped the viral cells go into the latent stage. Accordingly, these scientists effectively demonstrated that galectin-9, a beta-galactoside-binding lectin; reactivate latent HIV and makes infected cells visible to the immune system.

Galectin-9 binds to certain classes of sugars present on the surface of cells; this leads to the signaling of reactions responsible for forcing the latent cells out of hiding. Researchers also believe that these sugar coatings may hold the key to new therapeutics that can be harnessed to cure HIV and possibly a range of other infectious diseases.

This also strongly increases the levels of an antiviral protein called “APOBEC3G” in infected cells. APOBEC3G is a lethal mutagen that destroys the genetic code of viruses including HIV, thus prevents further infection.

These findings reveal that galectin-9 is a new weapon that could eradicate the latent viral cell reservoir. Galectin-9 can thus become an alternate way to cure the disease and prevent relapse when medication is stopped, instead of life-long treatment to that prevents latent cells to activate.