If given a choice most of us would prefer to buy things directly from the source. The reality, however, is quite different. If you wanted to buy an SUV, would you rather go to a car dealership where you could test drive and compare several SUVs or would you prefer to go to a Subaru outlet, where you only had one or two options to choose from? So, why then, do brands prefer to sell directly to the consumer? A lot of startups today are adopting the direct-to-consumer sales model and it has shown to be a success in terms of implementing quality and controlling costs.

To understand how brands these days are selling directly to the customer and avoiding the intermediaries, let us look at Tesla’s sales strategy. Tesla’s growth due to the Direct-to-Consumer (D2C) model provides important lessons for new businesses and/or those that are aiming for better service delivery and cost minimization.

The market for fully electric vehicles is growing. Some reasons behind the growth include new regulations on safety and vehicle emissions, technological advances, and shifting customer needs and expectations. But much of the mainstream acceptance and excitement for electric cars can be traced back to Tesla Motors Inc.

Tesla Motors, Inc. is an American automotive and energy storage company that designs, manufactures, and sells luxury electric cars, electric vehicle powertrain components, and battery products. It is a public company that trades on the NASDAQ stock exchange under the symbol TSLA. In the first quarter of 2013, Tesla posted profits for the first time since its inception ten years ago.

Tesla founder and CEO Elon Musk launched the company with the mission, “to accelerate the advent of sustainable transport by bringing compelling mass market electric cars to market as soon as possible.” This mission has served as the backbone to Tesla’s very successful business model.

Tesla took a unique approach to getting its first vehicle in the market. Instead of trying to build a relatively affordable car that it could mass produce and market, it took the opposite approach, focusing instead on creating a compelling car. This allowed Tesla to acquire funds for manufacturing more cost-efficient cars which the public could buy. In a post on Tesla’s website, CEO Elon Musk said this about the company’s mission, “If we could have [mass marketed] our first product, we would have, but that was simply impossible to achieve for a startup company that had never built a car and that had one technology iteration and no economies of scale”. 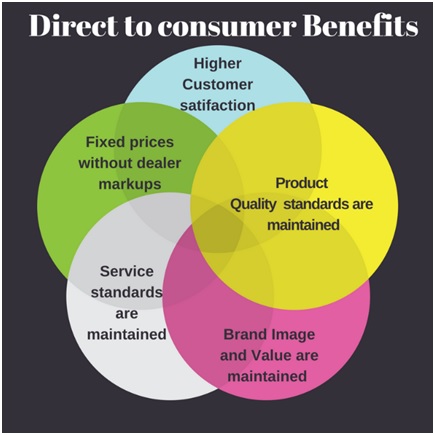 Unlike other car manufacturers who sell through franchised dealerships, Tesla uses direct sales. It has created an international network of company-owned showrooms and galleries, mostly in prominent urban centers around the world.

By owning the sales channel, Tesla believes it can gain an advantage in the speed of its product development. But more importantly, it also creates a better customer buying experience. Unlike car dealerships, Tesla showrooms have no conflict of interest. Also, customers only deal with Tesla-employed sales and service staff. Tesla has also made use of Internet sales where consumers can customize and purchase a Tesla online. 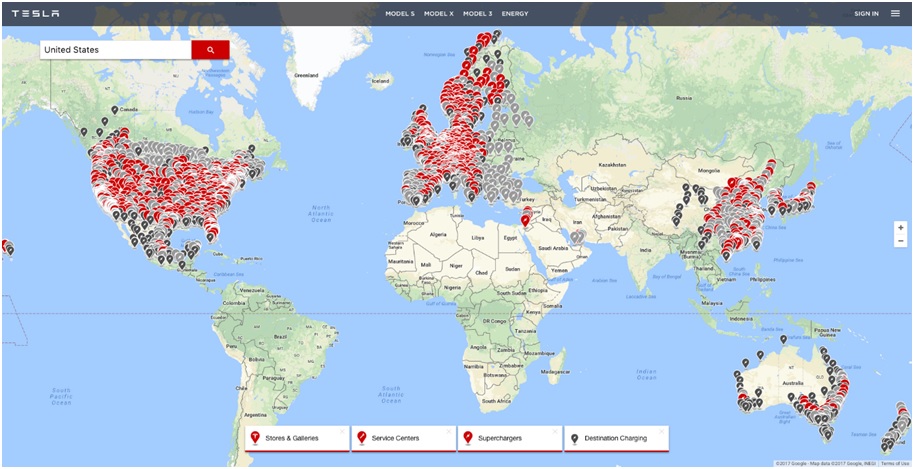 Customers can charge or service their vehicles at the service centers or the Service Plus locations. Also, in certain areas, Tesla employs what it calls Tesla Rangers. They are mobile technicians who can service vehicles from your house. Sometimes, no onsite technician is required at all. The Model S, can wirelessly upload data so technicians can view and fix some problems online without ever needing to physically touch the car. As of July 11, 2017, there are 150 Tesla service locations and due to upcoming mass-produced Model 3 the number would increase to 250. 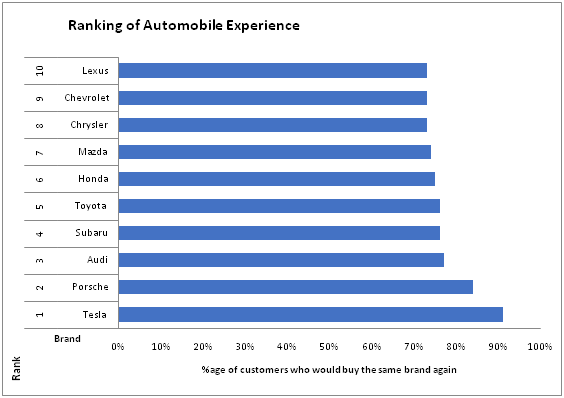 In a study by Consumer reports, USA’s largest consumer satisfaction rating agency, it was found that Tesla Car owners faced the least amount of after-sales service difficulty and were among the most satisfied car owners. This is a direct result of Tesla’s direct-to-consumer sales model. Bad service experiences were found to be due to dealers who are focused on their own margins rather than the customer’s satisfaction. Tesla’s direct sales model omits the need for such middlemen.

To summarize, the Direct-to-Consumer sales model has several advantages over the Traditional model. A brief overview of the differences:

Though many American states oppose Tesla’s direct sales model, the consumer is the real winner in all of this. Franchisee retailers drive the price up due to margins and commissions, which is borne by the consumer at the end of the day. Not only the consumer, even the manufactures benefit from adopting this sales model. They get more control over the operations which in turn helps to maintain quality standards. Tesla’s unique approach, similar to that of Apple with its Apple stores, is the future.