In the hotly patent war over the priority to the invention of the CRISPR-Cas9 system between two of the most powerful universities in the US, last week on 15 February 2017, judges at USPTO ruled in favor of the Broad Institute, MIT and declared that “there is no interference-in-fact” between the two parties. In other words that the Broad Institute will retain the exclusive rights to decide who is allowed to use this groundbreaking thereby dealing a blow to the University of California.
Functional CRISPR/Cas loci comprise a CRISPR array of identical repeats intercalated with invader DNA-targeting spacers that encode the crRNA components and an operon of cas genes encoding the Cas protein components. CRISPR mediated immunity mainly occurs in three stages i.e. (i) insertion of a short sequence of the invading DNA as a spacer sequence into the CRISPR array; (ii) transcription of precursor crRNA (pre-crRNA) that undergoes maturation to generate individual crRNAs, each composed of a repeat portion and an invader targeting spacer portion; and (iii) crRNA-directed cleavage of foreign nucleic acid by Cas proteins at sites complementary to the crRNA spacer sequence (Sanderet.al, 2014).

The real value of the , however, was soon recognized as a gene editing with clear promise not only for basic science applications, but also for its therapeutic potential. CRISPR-related research and applications efforts have shown a stunning progress, triggering a revolution in the genome wide studies, resulting in several companies seeking to develop technologies that focus on CRISPR-based therapeutics. Globally, scientists, biotech and drug companies, and university licensing officers are trying to capitalize on the research opportunities offered by this and are using this versatile system on a multitude of species.

Although promising, many questions do remain with regard to CRISPR-based therapies e.g., immune response against the CRISPR therapeutic and off target editing effects. In addition, there are also many regulatory and safety concerns that must be considered as these technologies and therapies are being developed, including the potential for non-therapeutic use, like editing the genes of unborn children for engineering perfect baby.

The Patent Controversy
As with all landmark inventions (e.g., identification of the HIV), there is controversy about who developed the idea first and who has patent rights to it. Given the commercial potential of CRISPR-Cas9 system, patenting is an obvious concern. In a legal maneuver with billion dollar implications two of the most powerful universities in the US are engaged in a vicious war over the priority to the invention of the CRISPR-Cas9 system. In this battle, first blood was to Feng Zhang (Broad Institute of Harvard and MIT) who won the first of several sweeping patents that cover using CRISPR in eukaryotes—or any species whose cells contain a nucleus. That meant that they’d won the rights to use CRISPR in mice, pigs, cattle, humans—in essence, in every creature other than bacteria. Zhang’s opponents are Jennifer Doudna (University of California, Berkeley) and Emmanuelle Charpentier (Helmholz Centre for Infection and Research) who have publicly described the CRISPR-Cas9 editing in the journal Science in 2012 (Jinek M et al 2012).

Although Doudna and Charpentier filed a patent application seven months before Zhang’s, Feng Zhang was able to get a patent under the old ‘first to invent’ rules (which to date are no longer applied). Under ‘first to invent’ the one being able to prove that he was first to make the discovery, wins the patent, regardless of the date of filing. The Broad Institute claims that the paper by Dr. Doudna and Dr. Charpentier in 2012 did not demonstrate how to alter DNA in cells with nuclei, including human cells, something requiring the inventive steps. Since these applications were filed prior to March 16, 2013, the inventor(s) who first invented this invention have the right to patent it, and disputes regarding who was the first to invent are resolved using a procedure called an interference. 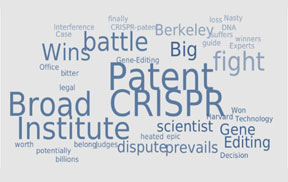 In January 2016, PTAB granted UC Berkeley’s request for a patent interference (Interference No. 106,048 under the provisions of 37 C.F.R. § 41.203(b)) between its filed application for the use of CRISPR in vitro and in prokaryotes and Zhang’s patent that specifically described the use of CRISPR in eukaryotes. In December 2016, the court heard the only oral arguments to be given on the case. UC Berkeley’s lawyer argued that Zhang’s accomplishments in eukaryotes were an obvious extrapolation of Doudna and Charpentier’s work, and thereby Broad’s patent was interfered with the earlier application. To counter the Broad’s lawyer argued that the University of California’s patent application did not specify how CRISPR–Cas9 editing could be adapted for use in eukaryotic cells and Doudna were facing troubles in eukaryotic system. The Broad’s patents did make that distinction: as a result, the lawyers argued, the two patent families would not overlap.

Broad Prevails in CRISPR Patent Interference Case
After 13 months, on 15 February 2017, judges at USPTO ruled in favor of the Broad Institute and declared “that there is no interference-in-fact” between the two parties. In other words, key CRISPR patents awarded to the Broad beginning in 2014 are sufficiently different from patents applied for by University of California, Berkeley that they can stand. In their 51-page decision, the USPTO judges note that Broad’s patent claims are limited to using CRISPR/Cas9 in eukaryotes—organisms such as plants and animals. Berkeley’s patent makes broader claims over using CRISPR in any organism. But in 2012, when the patent was filed, the researchers had only demonstrated CRISPR’s ability to edit genes in prokaryotes—such as bacteria. They applied the technique to eukaryotes shortly thereafter.

The ruling makes no stipulations about approval of Berkeley’s patent, which had been held up by the interference. It will now undergo its own review. Berkeley could appeal the finding to the U.S. Court of Appeals for the Federal Circuit or it could goes back to the Patent Office and continues to argue their claim. The outcome would dictate whether whatever claims Berkeley is entitled to are limited to using the system in prokaryotes — or whether their claims apply to the use in eukaryotic cells of plants, animals and humans. If Berkeley’s claim is limited to bacteria, “it would be a tremendous financial blow to Berkeley.

CRISPR-Cas9 Licensing
In this patent war the stakes are very high. The control of the patent is crucial for a phalanx of biotech startups racing to commercialize CRISPR . In assessing the current landscape of CRISPR-Cas9 patents, it is readily apparent that the space is largely dominated by the patents that were filed by Jennifer Doudna, Emmanuelle Charpentier, and Feng Zhang. Even before the ownership of patents are finalized, the institutions behind CRISPR have wasted no time capitalizing the market by entering into a series of license agreement with commercial enterprises for the applications (Contreras JL et al, 2017). 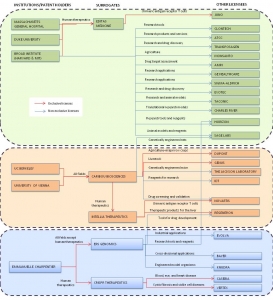 Doudna’s work has been licensed to Caribou Biosciences, which in turn has granted exclusive use of its in human therapeutics to Intellia Therapeutics. Doudna’s co-inventor, Emmanuelle Charpentier, assigned her portion of the patent rights to London based CRISPR Therapeutics. On the other end the competing the Broad Institute has granted an exclusive license to the pharmaceutical company Editas Medicine for therapeutic applications of CRISPR-Cas9, as well as non-exclusive licenses for other applications to GE Healthcare, Monsanto and German drug-developer Evotec.

Broad’s patent award means that the institution will retain the exclusive rights to decide who is allowed to use this groundbreaking . It’s unclear what will happen to Intellia Therapeutic and CRISPR Therapeutics, two companies that licensed CRISPR-Cas9 from Berkeley. In the aftermath of the news on Wednesday, the market traders pushed Editas (aligned with Broad) stock about 30% throughout the day and Intellia (aligned with UC) stock dropped nearly 10%.

CRISPR-Cas9 battle worth- A question of intent
CRISPR-Cas9 is unlikely to be the last genome-editing ever discovered. Bacteria have certainly come up with other ways to reach the same end of genome editing, ways that aren’t covered by UC’s or the Broad’s claims. Since CRISPR-Cas9’s discovery, researchers have discovered many alternatives to it that may wind up being superior. That could make either of these patents ultimately of little importance.

In 2015, the Broad Institute announced a second CRISPR system, CRISPR-Cpf1 (Kleinstiver BP et al, 2016), that some suspect may be superior to CRISPR-Cas9 because it is a smaller, simpler enzyme. In May, Chinese researchers published a controversial paper on NgAgo (Gao F et al 2016), an entirely new system that they said can also be used to edit mammalian DNA. In June, researchers (Abudayyeh OO et al. 2016) from several universities announced the discovery of C2c2, a CRISPR enzyme that targets RNA, rather than DNA. And recently, researchers at Berkeley announced the discovery of two new CRISPR/Cas systems, CRISPR-CasX and CRISPR-CasY (Burstein D et al 2017).

Conclusion
With the PTAB interference decision, neither the commercial consequences nor the reputational ones will hit immediately. Academic scientists are still free to use CRISPR without a license, however. In the future, if an academic scientist using CRISPR wishes to commercialize research, that scientist would need to seek a license to do so. From the perspective of companies, people who are using this commercially will need to get licensing from both parties to proceed if they’re using the in plants or animal cells.

To conclude, PTAB interference decision has for sure has reshaped the history of CRISPR and for now Broad’s Feng Zhang will go down in history as the scientist who invented the form of CRISPR poised to revolutionize the world.