UK Votes for Brexit- What Happens Next?

On 23 June 2016, the people of Britain voted for Brexit- the Britain exit from the European Union (EU) in a historic referendum. Though Britain’s vote to leave the EU is not legally binding, and theoretically it could be blocked or overturned yet it would be seen as political suicide to go against the referendum of the people.

But what happens now? 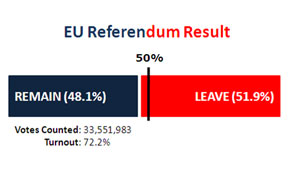 Pound against Dollar and Euro Summary of Impact on Brexit