The majority of 5G service providers have rolled out their services throughout the country, and a list of them is provided below in the snapshot. 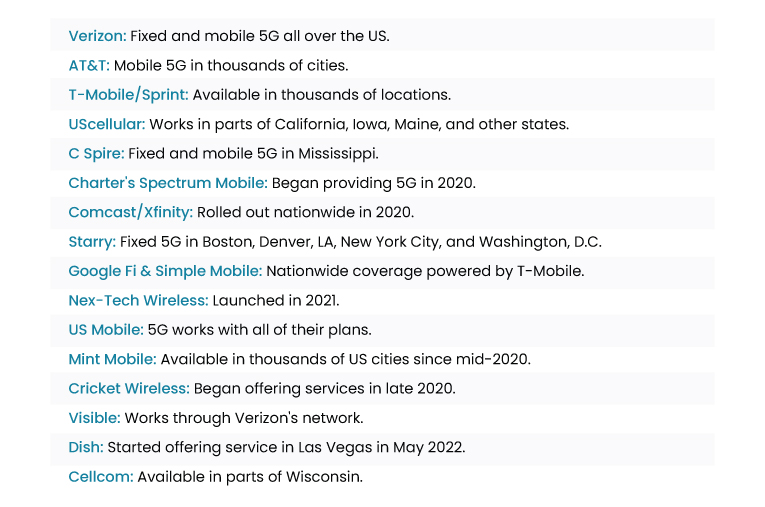 Current and Future 5G Bands in USA (As per FCC).

High-Band: The FCC concluded its first 5G spectrum auctions in the 28 GHz band, the 24 GHz band, and the upper 37 GHz, 39 GHz, and 47 GHz bands. The FCC is also working to free up 2.75 gigahertz of 5G spectrum in the 26 and 42 GHz bands. It has initiated a proceeding to make more efficient use of additional millimeter-band spectrum in the 70/80/90 GHz bands.

Low-Band: The FCC is acting to improve the use of low-band spectrum (useful for wider coverage) for 5G services, with targeted changes to the 600 MHz, 800 MHz, and 900 MHz bands.

Unlicensed: Recognizing that unlicensed spectrum will be essential for 5G, the agency is creating new opportunities for the next generation of Wi-Fi in the 5.9 GHz, 6 GHz, and above 95 GHz band.

Concerns around 5G and Aviation Interference

Several international airlines canceled flights to certain US airports over the fear of 5G interference with the aircraft’s equipment.

To better understand the issue, it is crucial to understand the root cause as 5G has been implemented for a while, and it never came up. So, what new has happened in 5G implementation causing this interference.

The answer is the rollout of 5G in mid-band or C-band, which has frequencies between 3.7 GHz and 3.98 GHz, adjacent to the radio frequencies used by modern aircraft (Like Boeing 777) to measure altitude. The aircraft has a piece of equipment called a radio altimeter that works in the C-band between 4.2 GHz to 4.4 GHz to measure the exact altitude of the aircraft and helps the pilot in landing safely during low/lousy visibility.

The Federal Aviation Administration (FAA) raised the concerns to the Federal Communications Commission (FCC), after which the deployment of 5G in C-band was delayed near the airports.

Post this, US telecom majors Verizon and AT&T announced that they were postponing the activation of 5G networks near the airports.

What are the US agencies doing to overcome the situation?

What else can be done to overcome the situation?