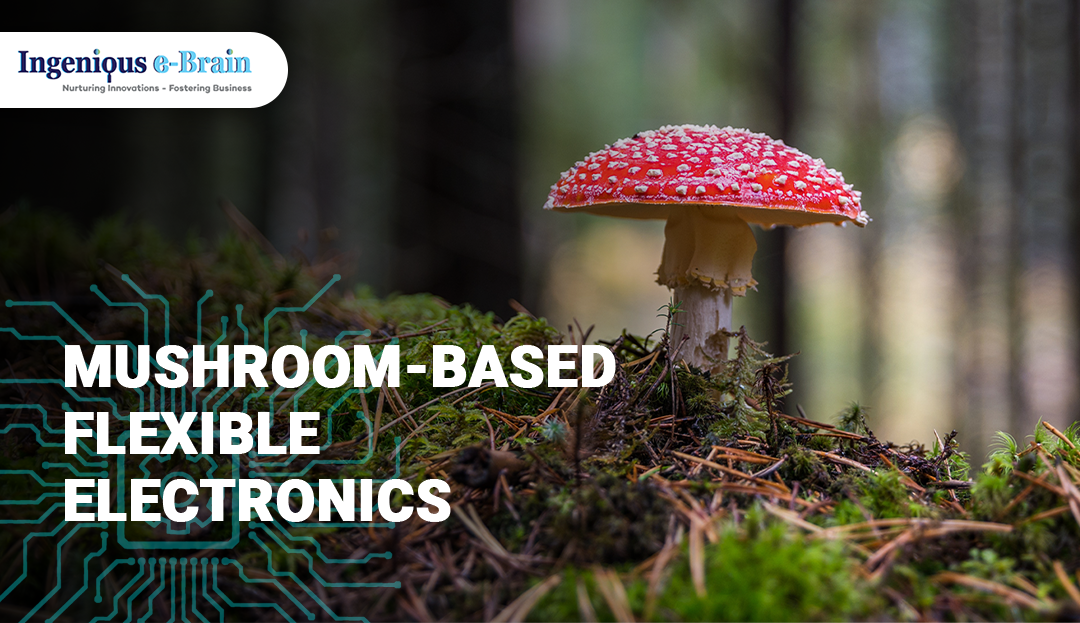 E-waste, also known as electronic garbage, is a significant pollutant and is becoming an alarming issue. However, researchers have processed mushroom skin such that it can be utilized to create biodegradable electronics. These gadgets are called “Myceliotronics,” named after the component of a mushroom used in their manufacturing. These gadgets emerge as a substitute for materials that are difficult to recycle and non-biodegradable, potentially eradicating all the e-waste we make.

How to Use fungus in electronics?

Mycelium skins can be used as substrates for electronic devices, physicists and materials scientists in Austria have revealed. The thin skins can create autonomous sensing devices consisting of mycelium batteries, a humidity and proximity sensor, and a Bluetooth communication module. Besides providing a flexible surface for electrical circuits to be patterned, the skins are biodegradable and can help cut electronic waste.

The researchers produced the mycelium skins from the fungus Ganoderma lucidum, which grows on dead hardwood in mild temperate climates. They used physical vapor deposition to place a thin layer of copper and gold on the skin to create electronic circuits. Metal was removed from this surface layer via laser ablation, leaving conducting paths behind.

After deposition and laser ablation of the metal layer, the researchers tested the resulting mycelium circuit boards. They found that they had high conductivity and thermal stability and could withstand around 2000 bending cycles before the shredding of metal film began and electrical resistance increased. The skins could also be folded several times with only a moderate increase in resistance.

Next, the researchers created a flat, 2 cm2 mycelium battery, using a mycelium skin soaked in a highly ion-conducting electrolyte solution (ammonium chloride and zinc chloride) as the separator and two mycelium skins as the outer casing. They claim that this structure resulted in a high percentage of the battery being biodegradable.

Circuit boards or printed circuit boards (PCBs) have various chemical components that are hard to separate and recycle. But mushroom skin degrades quickly in the presence of light.

Many species of mushrooms have a protective skin that is thin but can be rough. Martin Kaltenbrunner, a soft matter physicist, and professor at Johannes Kepler University in Austria wanted to see if they could be used in electronics. He primarily looked at a mushroom called Ganoderma lucidum. The dried skin of this mushroom is known to be thin, flexible, and capable of retaining its structural integrity. Moreover, the mushroom can withstand temperatures of over 200 degrees Celsius (390 degrees Fahrenheit), which is essential for a material on which electronic circuits will operate.

Kaltenbrunner has been researching fungi for some time, but not for electronics. He was seeking more ways to use mycelium materials as an alternative to Styrofoam. However, they immediately recognized its potential when they realized that the mushroom skin had all the desired properties to be used as a circuit base. However, mushrooms don’t conduct electricity. To bypass that, the researchers layered copper and chromium on top of it (and gold, in some cases). They then used lasers to create the circuit pattern onto the metalized mushroom skins. The result was almost as conductive as a standard PCB but fully biodegradable and recyclable — the researchers found they could remove and reuse these printed layers easily using a heat gun or solder iron.

Considering the potential of using mushroom skin as a biodegradable circuit board, the environmental footprint of the electronics industry can be significantly reduced. Around 50 million tons of e-waste is generated every year, and the figure keeps growing — that’s more than the weight of all commercial airplanes ever produced. While not all of that is PCBs, it’s an integral part. Meanwhile, the mushroom-based material can be recycled and grown sustainably from only waste wood.