Innovation in pharma indicates novel drug or drug-related discovery, thereby applying for exclusive rights for the hard work invested during R&D, clinical trials by the innovator company to discover the blockbuster drug. This exclusivity can be acquired by various means one is applying for the patent.

But anyhow, in the end, the blockbuster drug patents also must expire one day, which will attract generic competition. This patent expiration is making the market more attractive to the established generic drug makers and inviting innovators’ interest in generic expansion.

There is always a time when a patent expires, which results in a decline in the revenue of the patent owner. This time or situation caused due to patent expiration is known as “patent cliff.” The patent cliff is the major cause of loss for an innovative pharma company as they invest a lot in their R&D and clinical trials for a particular innovation. However, it is an opportunity for the generic players in the market, which gets many positive benefits from innovative company’s recent expired patents. 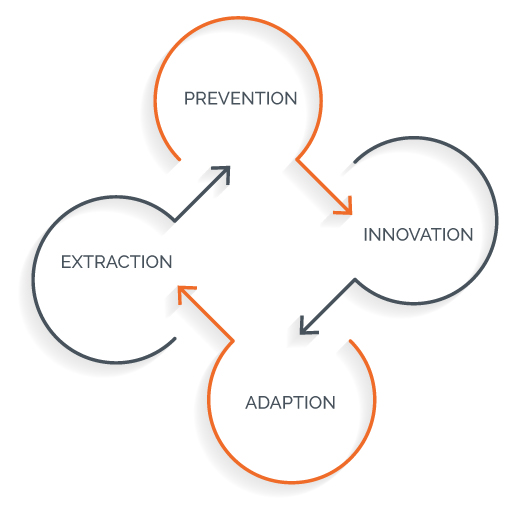 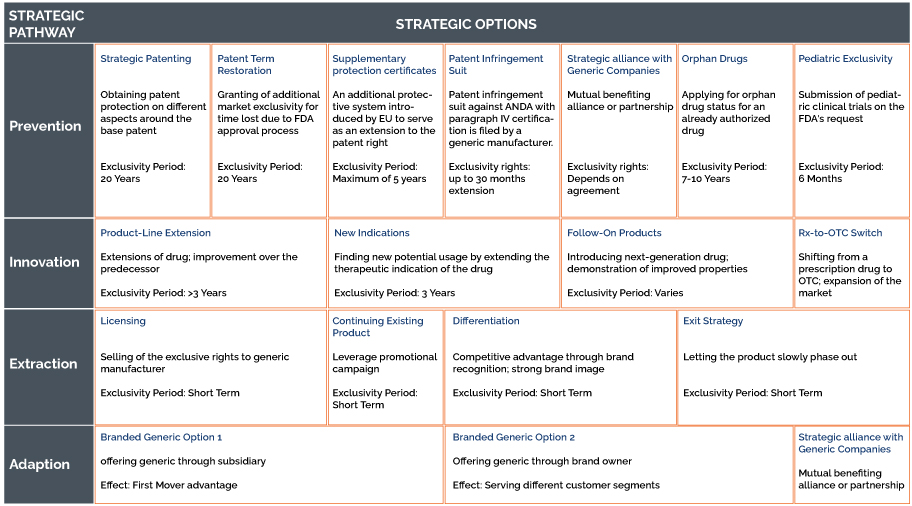 The principle behind this strategy is to extend the patent protection and temporarily prevent or hamper the generic competition, which legal measures could make possible.

The second strategy focus on innovating the existing drug to prevent competition. In this sense, product-related innovation strategies comprise.

Two conceptually different strategic approaches can be subsumed under this category –

The last strategic pathway is to introduce branded generics by establishing itself as an active player in the generic market. Two conceptually similar strategic alternatives fall into this category:

Safe entry
The generic manufacturer has to wait for the expiry of exclusivity and patent term to launch the generic version safely. Hence, in the safe entry option, once the innovator’s drug hits the market, the launch of a generic drug generally faces two main roadblocks. Firstly, are barriers posed by regulatory (non-patent) exclusivities, and secondly, patent and related term extensions of the innovator’s drug, which need to surpass for safer entry of the product.

The launch of a drug in most countries is controlled by the national drug regulatory authority (NDRA). Any product required to be launched must receive marketing authorization (MA) from the NDRA. The marketing authorization is granted to the company only if they can establish the drug’s quality, efficacy, and safety. The generic manufacturer is only required to establish bioequivalence to the innovator’s drug, which is highly advantageous for the generic company as it will avoid the cost of R&D and clinical trials that have already been invested by the innovator company.

The launch of a generic drug is prone to infringement of the innovator’s patents. A safe way of generic entry is to launch the product once the patent completes its exclusivity period (Patent expire). The ANDA applicants looking at a safe launch in the US for their generic products are required to certify their application with Paragraph 1, stating that such patent information has not been filed; Paragraph 2, certifying that such patent has expired; or Paragraph 3, certifying the date on which such patent will expire. In European countries and other countries, the requirement varies. India also has a requirement that the particulars of the patent status be furnished while filing Form 44 for seeking marketing authorization in India.
Some countries, such as the US, India, and Canada, have a provision known as a regulatory exception or Bolar exemption which gives authority to apply the patented product only after seeking marketing authorization. In India, Section 107(A)(a) of the Patent Act also provides this regulatory exemption to the generic company only after seeking proper marketing authorization.

Not waiting for the patent to expire might seem to be a faster way of launching a generic drug. However, this strategy is associated with risks and delays stemming from patent infringement and regulatory approvals. Launching a generic drug in a market involves receiving marketing authorization from NDRA of their respective countries. Some countries link such marketing authorizations to the patent system prevalent in their countries (patent linkage).

In countries following patent linkage systems, generic companies can get marketing authorization only if their product avoids any form of patent infringement. However, they must prove that the patented drug will not be infringed by the manufacture, use, or sale of the drug product, which will be launched by the generic company. Whereas, in countries not following the patent linkage system, the generic drug filers need to prove bioequivalence and not provide any patent-related information for the drug product.

Another approach for a generic company to launch their product into the market is by taking licenses from innovator companies during the patent term.

Voluntary licensing is beneficial to generic companies. The innovator companies primarily decide the terms and conditions before granting the license to the other party involved.

Compulsory licensing has been provided under Article 31 of the WTO TRIPS Agreement and is complied with by all major patent systems. Under the Doha Declaration on the TRIPS Agreement and Public Health (November 2001), member nations have been given the right to grant compulsory licenses and the right to determine the grounds for granting such licenses.

The implementation of generic medicine was given importance in the first place to make the healthcare system in India and other countries more affordable. However, the outcomes for the innovative firm are not favorable as they have invested a lot in R&D, drug discovery, development, and clinical trials for producing a safe drug in the public interest.

The effective implementation of these strategies is yet to be explored more. The tug-of-war between the innovative and generic manufacturers will continue, as this is a never-ending cycle of discovering and exclusivity rights expiration. However, both parties will also introduce the new approaches in the market for their favorable outcomes.