Carbon dioxide concentrations are rising mainly by the burning of fossil fuels. The global average amount of carbon dioxide reached record levels 412.5 parts per million, rising by 2.6 ppm that year. In 2019, it was 409.8 ppm, a rise of approx. 2.5 ± 0.1 ppm from 2018, the same as the increase between 2017 and 2018. Since carbon dioxide is the most vital gas in the earth’s system, natural rises in its concentrations have repeatedly warmed the earth’s atmosphere during the ice age cycle over the past million years. Various start-ups such as See O2 energy, MIRRECO, Hexas Biomass are working worldwide on energy technologies to break down GHGs into fuel, which later can be used to generate heat. Because if global energy demand rises and to be met mostly with fossil fuels, atmospheric carbon dioxide is projected to surpass 900 ppm by the end of this century.

So, to stop carbon emissions, Carbon capture, storage, and utilization, or CCSU, an emissions reduction technology has been adopted globally. CCSU revolves around various technologies to remove CO₂ from the flue gas and the atmosphere, then recycle the CO₂ for utilization and storage. Despite the adoption of systems to reduce the rate of CO₂ emissions, the cumulative amount of CO₂ in the atmosphere needs to be decreased to limit the detrimental impacts of climate change.

CO₂ capture aims to produce a concentrated stream of CO₂ at high pressure that can readily transport to a storage site. There are three main processes for capturing the CO₂ generated.

The accessibility of transportation to transport CO₂ safely is vital for the implementation of CCSU, done via pipeline and ship.

Once captured, then CO₂ is stored by various options. These include storage of gases in deep geological formations and solid storage by reaction of CO2 with metal oxides to produce carbonates. It was once suggested that CO2 could also be stored in oceans, adding to ocean acidification. That’s why it was banned under the London and OSPAR conventions. CO₂ storage in geological formations is at present perhaps one of the most reassuring choices.

The utilization option is an alternative to storage; captured CO₂ can be used as a commercial product, either directly or after conversion. Examples include its use in industries, for EOR, and conversion to chemicals or fuels.
The list of various companies which utilize captured carbon is as follows: 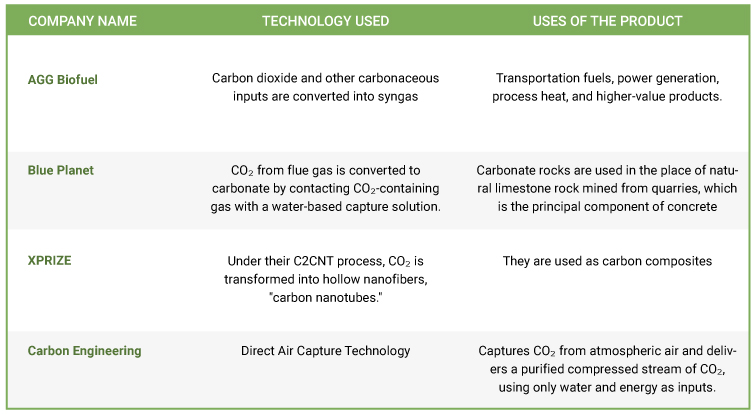 The environmental benefits of CCSU need to supersede the potential ecological risks, as its primary goal is far concerning.

CCSU is an essential option for achieving the goal of net-zero emissions. The role CCSU plays is evident in the IEA Sustainable Development Scenario, in which global CO₂ emissions from the energy sector decline to zero on a net basis by 2070.

In the first phase to around 2030, the point is on capturing emissions from existing power plants and factories. During the second phase, from 2030 to 2050, the contribution of CCSU to cumulative emissions reductions grows to 12% and for nearly 15% from 2050 to 2070 relative to the Stated Policies Scenario.

Present status of CCSU towards a net-zero goal:

Current CCSU Projects Around The World

In this article, to better understand the possible role of CCSU, we looked at various CO₂ capturing technologies, reliable storage options, and utilization possibilities. We also assessed that various CCSU Projects are operating worldwide today, highlighting the breadth of this approach. The environmental benefits outweigh the potential environmental risks associated with CCSU.

By 2050-2070, the energy world looks completely different. Global energy demand is around 8% lesser than today, but it assists as an economy more than twice as big and a population with 2 billion more people. Almost 90% of electricity generation comes from renewable sources, with wind and solar accounting for nearly 70%. The pathway designed to net-zero emissions is global in scope, but each country will need to develop its plan of action. More international collaborations must be valued in the future because without which transition to net-zero could be held up for decades.