The Growing Use of Robotics in the Food Industry - IEBS Blogs

»  Blog   »   The Growing Use of Robotics in the Food Industry

The Growing Use of Robotics in the Food Industry

Over the last two decades, advances in different technological fields have turned ‘fictional’ robots into reality. The field of robotics falls under the umbrella of industrial automation. Due to the pressing need for increased efficiency, robots have been deployed to simplify activities. Robots are also becoming an essential component in many sectors. Previously, the use of robotics in the food industry was limited to food processing and palletizing in dairy, drinks, chocolates, and food tins. With the advancement compared to traditional methods, food manufacturing and processing plants are using cost-effective automation solutions to increase production volume. Since relying on manual labor is now considered a classic principle, robotized handling/manufacturing installations are becoming more common. Picking, putting, packing, and palletizing are all examples of popular applications.

Food industries are shifting towards automation to reduce food processing costs while increasing food quality and security. In this background, industries are implementing a systemic use of automation and robotic systems and fully automated digitized process management to improve food manufacturing productivity while also lowering production costs dramatically.

The food industry has been reluctant to embrace robotics for a variety of reasons. Experts believe, however, that food industry robots are evolving, and companies that do not adopt modern technologies risk falling behind. Food demand continues to rise as the world’s population grows to over 7.5 billion people. Consumers are searching for more than just better-quality, organic food at their fingertips. Robotics and automation are critical components of the approach. In comparison to other sectors, the food processing industry has been reluctant to adopt robotics.

However, on the other hand, Robotics has made inroads into nearly every aspect of the food industry in recent years, from the farm to the kitchen. The following are some aspects in which the industry is evolving:

Classification of Robots in the Food Industry:

In the food industry, robots are mostly used for pick-and-place tasks such as food sorting, packaging, palletizing, and food serving. 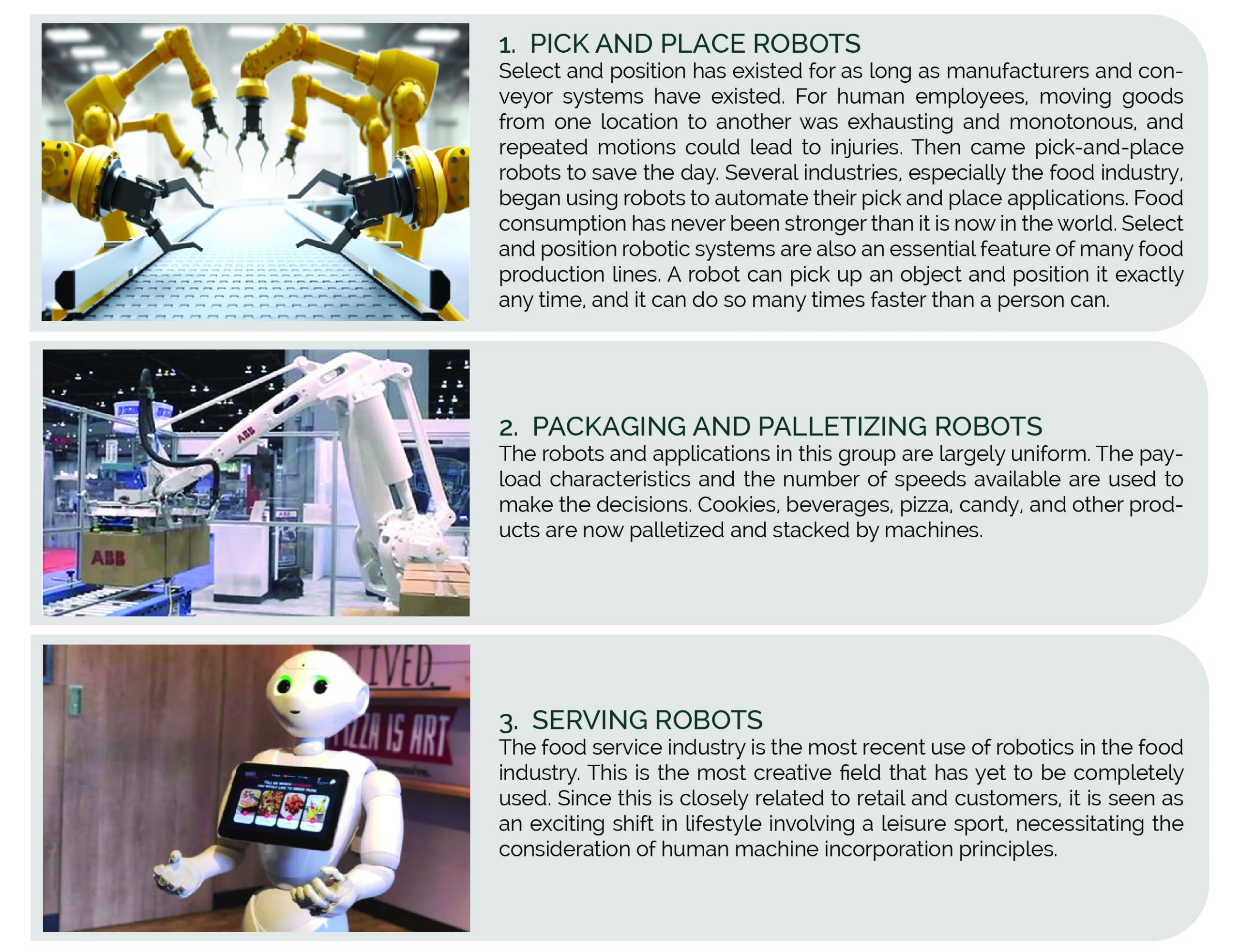 The global Food Robotics industry was worth USD 402.2 million in 2019, and it is projected to rise to USD 745 million by the end of 2026, with a CAGR of 9.1% from 2021 to 2026. The industry is expected to expand due to a growing focus on improving operating quality in manufacturing and rising demand for packaged foods.
Food robotics market size is expected to rise in response to the packaged food demand. There has been an increasing need to package food items to extend their shelf life and cater to the market for ready-to-cook and ready-to-eat products. The food robotics market has been driven by the mass production of packaged food goods, especially in the United States, Japan, France, and Italy. Many large-scale food processing plants are automating processes to ensure the efficiency and accuracy of stock-keeping units (SKUs).

Challenges of Robotics in the Food Industry

Despite the efficiency of IR applications in food processing, their adoption is sluggish compared to other manufacturing sectors. The fundamental challenges preventing their acceptance in food manufacturing are divided into four categories, as seen below-

Recent Advancements of Robotics in the Food Industry:

Trust plays an important role in developing innovations in the food industry, according to a thorough examination of the market. The rise of robotics in the industry has been widely observed worldwide, but confidence between humans and robots seems to be lacking.

When looking at the various implementations of robotics in the food industry, it is apparent that what companies give up in speed can be achieved in agility. The robotics application horizon has expanded to a great extent. Robots can change processes ranging from packing and handling to palletizing, food sorting, and food operation.

When predicting where careers will go in the future, it is apparent that hardcore skills, such as cooking methods, will become less important as robots will take over. Laborers and staff would need to be skilled in trades that are much more valuable than performing monotonous tasks that are potentially detrimental to the body in the long run.

The industry stands to gain a lot from the transition to food-producing robots. Robotics can help to tackle the problem of a labor shortage in the food chain. Not only can labor shortages be resolved, but the following challenges in this ever-changing industry will be minimized as well:

Today’s robots are significantly less expensive than their predecessors. They are a lot easier to set up and use. Today’s robot construction and materials are more user-friendly. They have better ways to clean the robot, which is particularly important in the food industry with its stringent HACCP regulations.